We Have a Heart for the Homeless, Hurting & Hungry in the Rock River Valley

A Safe, Caring Place for People in Need

With the help of our community, our ministry seeks to:

Rescue those in immediate crisis
Recover people’s dignity and sense of self-worth
Restore the lives of men, women and children

Your support lifts up the hurting in our community and gives them a second chance in life.

Why we do what we do…

Rockford Rescue Mission shares hope and help in Jesus’ name to move people from homelessness and despair toward personal and spiritual wholeness.

Core Values
Statement of Faith
“Rockford Rescue Mission seeks to glorify God through offering individuals and families the Gospel-centered care that touches and changes their hearts, their souls and every aspect of their lives for a better, more hopeful future.”

While Rockford Rescue Mission has seen a lot of changes since our founding in 1964, one thing never changes: Our mission to move people from homelessness and despair toward personal and spiritual wholeness.

Here’s how your support makes our mission into a reality! 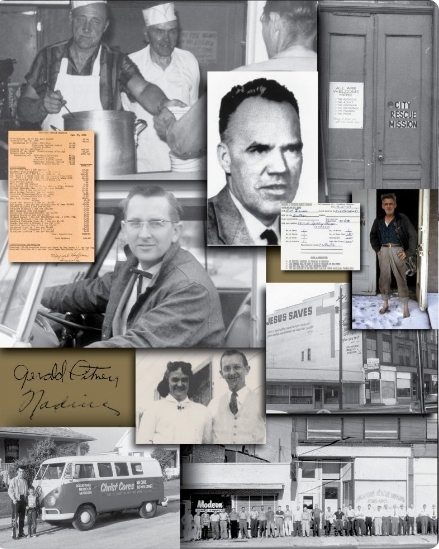 Ray Stewart, a recovered alcoholic, comes from the Pacific Garden Mission in Chicago to establish a similar mission in Rockford.

Ray rents a building at 116 Kishwaukee St. for $100 a month and opens the doors of the Rockford Rescue Mission in May. The sign on the front door reads, “All are welcome here. The alcoholic, the addict, the stranger, the sojourner, the pilgrim, the poor. There is hope for all who enter here.”

At Ray Stewart’s recommendation, the Board appoints his pastor, Rev. G.O. Pitney with his wife, Nadine, as new director. The first newsletter is published, later called The Rescuer.

All debts are paid off. Rev. Pitney appeals in The Rescuer, “Won’t you help us build a modern city rescue mission which any Christian would be proud of and upon which the world would look with greater respect?”

Forty to fifty churches are supporting the Mission and The Rescuer circulation reaches 2,000. 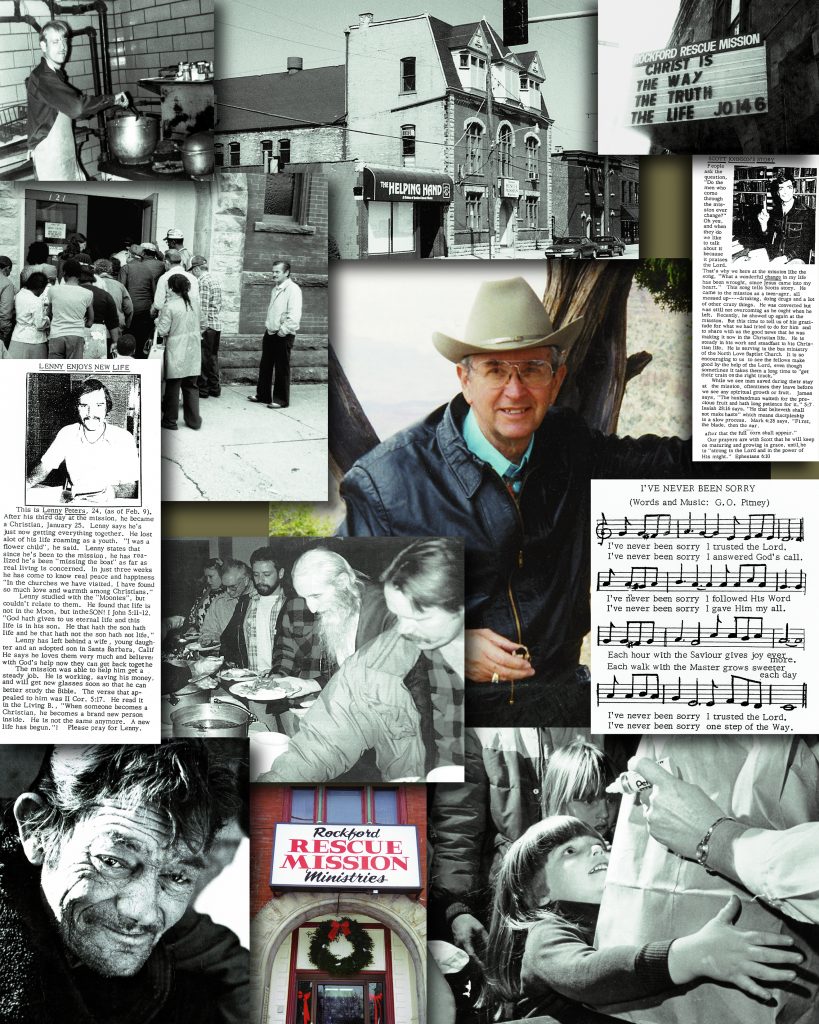 The Mission buys the 21,000 square foot Germania Club at 121 South Madison St. for $30,000. The building, built in 1892 with a ballroom, bar and Rockford’s first automated bowling alley, is converted into a place of refuge, redemption and recovery. The new Mission motto is: “Help all the people we can, in all the ways we can, as long as ever we can.”

The Mission partners with Christian Love Acres, a 60-acre farm near South Beloit, to provide work rehabilitation for the men through doing chores, caring for animals, buying and selling hay and painting tractors.

Women and children are included in outreach services; a literacy program began, and free clothing is distributed to the needy through Family Day program.

The abandoned Poole Hotel at 730 West State St. and the house behind it on Elm Street are purchased from Salvation Army for $10,000 to care for women and families. “Ye Rescue Shoppe” opens in a rented building at 309 Seventh St. to sell donated goods to support the Mission. Mission founder Ray Stewart dies in an auto accident. In tribute, G.O. Pitney writes, “If it had not been for Ray Stewart, there would not be a Rockford Rescue Mission.” 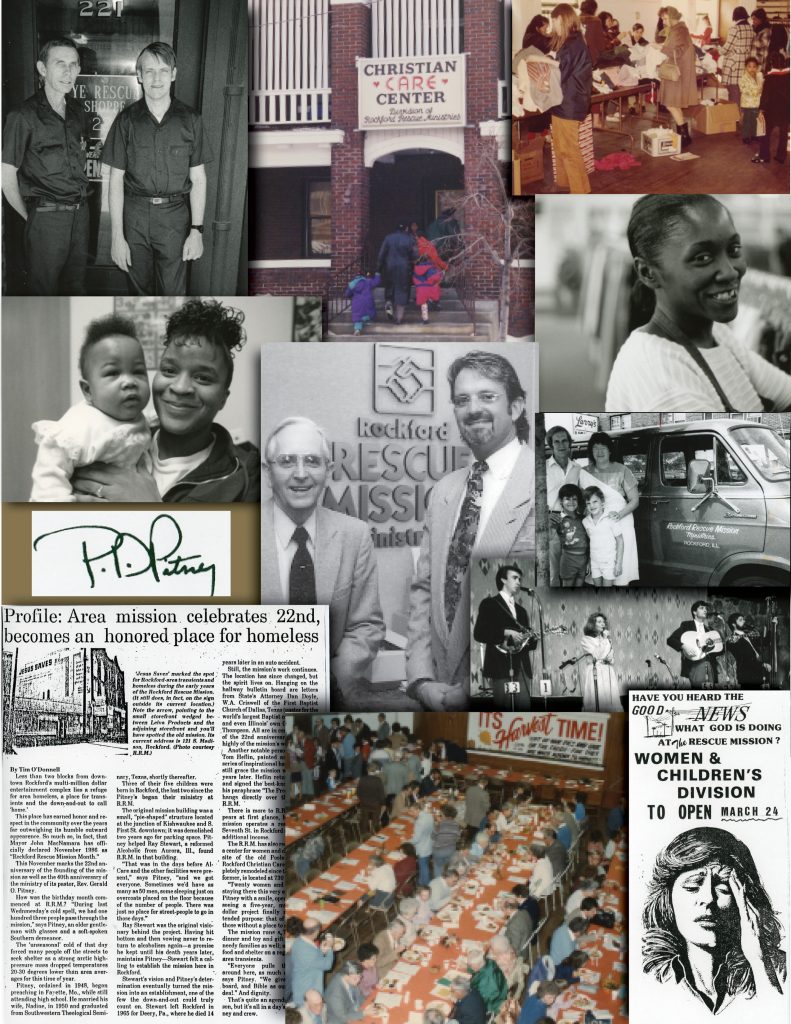 Perry Pitney (oldest son of G.O. and Nadine Pitney) and his wife, Sherry, are hired to lead the programs (Perry is named Associate Director in 1984 and Director in 1987).

“The Pitney Family Gospel Singers” begin touring to give concerts in order to raise awareness and funds for the Mission.

The Christian Care Center, with eighteen rooms for women and children’s recovery, is dedicated after six years of renovations.

“The Pitneys” are named “Contemporary Gospel Bluegrass Group of the Year” by the Society for the Preservation of Bluegrass Music in America.

“The Helping Hand” at 125 Madison St. opens to distribute free food and clothing to those in need. 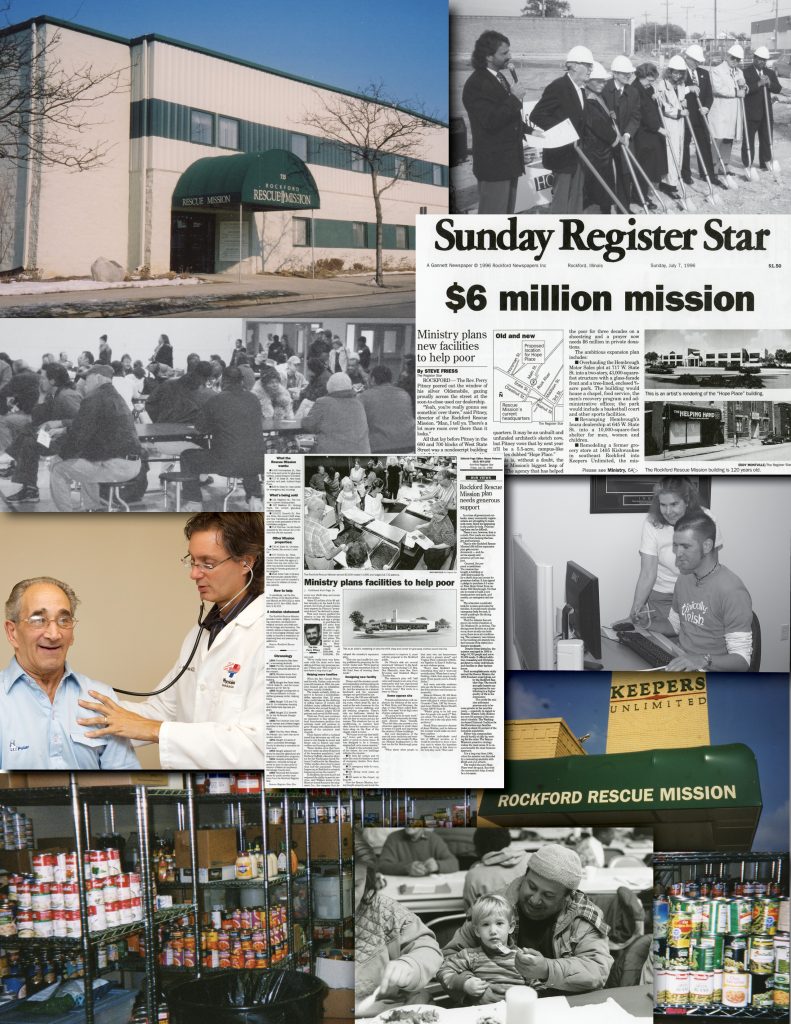 The Mission purchases and develops 42 acres in Southwest Rockford for a children’s day camp and recreational/agricultural programs known as Mission Acres.

The Rockford Register Star presents the Mission with its Excelsior Award for outstanding contribution to the community.

The Mission relocates to Hope Place. This new facility is made possible by a $4.5 million capital campaign. The Women’s Crisis Center, Hope Clinic and a second thrift store are opened. The staff increases to 102 employees. G.O. and Nadine Pitney retire. 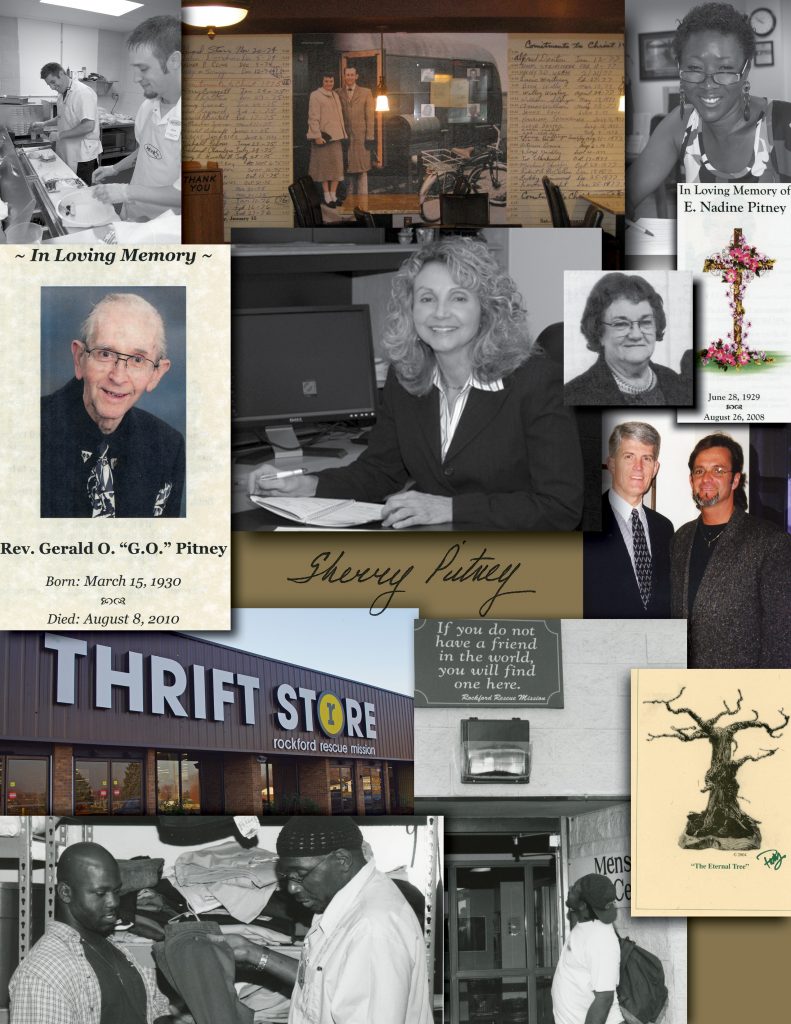 The Mission is licensed by the Illinois Department of Human Services as a State Certified Recovery Home. Hope Dental Clinic opens.

The Mission celebrates its 40th anniversary. Rescuing the Raggedy Man: The History of Rockford Rescue Mission by Perry Pitney and Jim Killam is published.

The building at 625 West State St. is renovated to house Restoration Café, a vocational training center and café open to the public. The Mission’s “Mother of Rescue,” Nadine Pitney, dies after a long battle with cancer. The Mission celebrates 10 years at Hope Place and 45 years of ministry. The Mission receives the Spirit of Caring Award from Crusader Community Health.

Rev. G.O. Pitney dies at age 80 after battling Parkinson’s Disease for 26 years. The block of Horsman Street between State Street and Mulberry Street is designated “Pitney Place” in honor of G.O. and Nadine Pitney.

The Mission expands its State Street campus with the purchase of the building at 212 N. Rockton Ave. to accommodate needs of the facilities department.

The Mission purchases the former 56,000 square foot Bob’s Hardware to expand the Thrift Store operation. The Mission receives a $750,000 grant from the Federal Home Loan Bank in Chicago to fund renovations at Hope Place.

The Mission celebrates its 50th anniversary with “What’s your story?” theme.

A $7 million building expansion called Pitney Place is completed. The women and children move in May 10, 2016. The Jay and Christine Akely playground is dedicated. The former Pregnancy Care Center at 611 West State is purchased for expansion.

As an essential service during the unfolding COVID-19 pandemic, the Mission perseveres and innovates. For the first time ever, all community meals and the Thanksgiving Feast and Christmas Banquet are served to-go. The Restoration Café and the Remade shop combine as Nettie’s Mercantile, on the site of the former Restoration Cafe.

As the pandemic continues, periodic quarantines and lockdowns for portions of the Mission continue to keep residents, guests, volunteers and staff members safe. The Life Recovery Program meets requirements and standards as a quality program provider of the Genesis Process. The Life Recovery Program achieves a success rate of 63 percent. CEO Sherry Pitney is elected vice president of Citygate Network’s Great Lakes District.

Stay connected with our latest news and events. Sign up now and we will send you “30 Days of Blessings & Inspiration,” a free devotional booklet to help you celebrate the blessings all around you!

Get Help Now
Vounteer
Donate
What We Do

This website uses cookies to improve and customize your browsing experience and for analytics and metrics about our visitors both on this website and other media. Learn More